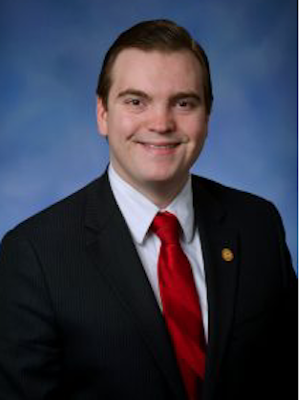 State Rep. Beau LaFave (R-Iron Mountain) is as mad about the state of Michigan’s roads as just about anybody. Some analysts have called Michigan’s roads the worst in the nation, according to MLive.

Whether Michigan’s roads are actually the worst or not, LaFave says Michigan is way behind in repair work and infrastructure projects, and he wants to see something done. He is not assured by Gov. Gretchen Whitmer’s latest fix: a new multibillion-dollar bond issue.

In her recent State of the State address, Whitmer proposed a bond issue of $3.5 billion to address road projects. LaFave said the governor’s proposal to sell bonds for road funding would put a massive financial burden on taxpayers for generations to come.

“This isn’t Washington, D.C. We are not in the business of forcing tomorrow’s Michiganders to fix today’s problems,” LaFave said in a statement after the speech. “The unborn are not a credit card.”

While Whitmer’s bond proposal will not impose new taxes, it will require the state to spend up to $300 million annually paying back the loans with interest. Michigan is still paying back more than $1 billion in old road construction bonds from more than a decade ago.

By issuing $3.5 billion in bonds, Whitmer will nearly double the state’s spending on highways and bridges over the next five years. LaFave likens the move to credit card spending. “Just like every family in Michigan knows, if you want nice things, you must pay for them. And maxing out the credit cards is not how you do it,” LaFave says.

At a recent rally in Battle Creek, President Trump chided Whitmer, saying “She’s not fixing the potholes.” LaFave says local roads are in worse shape than state roads and highways, and Whitmer’s bond issue will do nothing for them.

Whitmer’s administration is eager to act soon, while interest rates are low. If Michigan doesn’t issue bonds now, inflation and continued degradation of the roads would outpace the cost of the bond interest.

Want to get notified whenever we write about Michigan Rep. Beau LaFave ?

Sign-up Next time we write about Michigan Rep. Beau LaFave, we'll email you a link to the story. You may edit your settings or unsubscribe at any time.